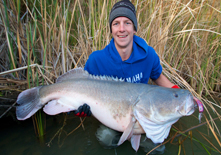 Fishing for large Murray Cod is a little

like waiting for  your footy team to win a premiership, you keep turning up and hoping, but for some it can be a hell of a long time between drinks. Large Murray Cod can be buggers of fish, they are bloody challenging to catch for so many different reasons

. If you’re good enough to get one on the end of your rod you’ve still got the task of navigating the fish through timber and safely to the boat. I’ve spent so many fruitless trips up the Murray, some of those trips were catching nothing at all, others consisted of catching plenty of Golden’s but not bearing the true gift of large Murray Cod. The elusive nature of giant Cod is what gives me the unquenchable thirst for this fish, 10 minutes after catching a quality fish and your itching for another one, it doesn’t how many servings you have it is never enough.

Having a plan of attack is crucial for targeting any fish, especially with large Cod as you are only going to get limited opportunities even if you do everything right. That might be 6 hits from big fish over the course of a trip or it may be just 1 or 2. On those super tough trips when the fish will not bite you would do anything to get a couple of hits, it can come down to the details between getting those couple of fish and not getting anything.

If we’re going away for a trip we give ourselves 4-5 days, the first day is all about trying as many things as possible to get a feel for the river and see what the fish are reacting to. 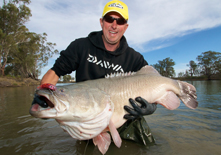 Setting a plan and sticking to it is quite possibly the most important part, too often anglers are chopping and changing every hour or so, they’ll cast a few snags for an hour, have a bit of a troll, go and cook some lunch, never really giving anything long enough to work. Even when you do crack a pattern it can still be hours between strikes so persistence is the name of the game. When your starting out it is bloody hard, there is that uncertainty in regards to thinking am I trolling the right depth, is this the right lure, am I fishing in the right area, these are some of the questions I used to wonder. And even after a day or two of not catching those questions do start to filter back in. Before a trip I’ll have at the very least my first day planned out, and I usually like to split my day into halves especially when daylight savings finishes and you’ve got shorter days. I’ll quite often have a morning of casting and then an afternoon of trolling to gauge if one is performing better than the other. I’ll be on the water at first light and will cast until lunch time, depending on how we went will determine plans for the afternoon, if we had 2 Cod strikes for the morning then I’ll still proceed to troll the afternoon. By the end of the day hopefully we’ve got information to work with, if we’d had 2 strikes casting in the morning and then no action in the afternoon trolling we’d then focus our efforts onto casting the following day, or vice versa.

There are many factors in chasing Murray Cod and none more important than lure selection. Every day is different, what worked on your last trip may not work this time, if you’ve got 3 people in the boat this is a great opportunity to have 3 different lures thrown to get an idea on what is working. You can have the first casting a spinnerbait, the second a hardbody around 90mm and the third casting a hardbody around 150mm. There are plenty of other variations you can include in there, the key is to mix it up as much as possible until you can establish a pattern, and then you can start to hone in on that pattern you can then put runs on the board.

In our most recent trip hardbodies 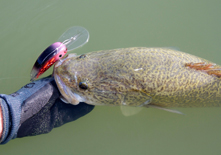 were by far the pick of the bunch, I usually cast lures around 120-150mm on the Murray however after seeing my mate get smashed by two big fish on a 90mm lure it got me changing over pretty quickly. I changed over to the same 90mm lure and boy oh boy did we have fun that weekend. We landed 5 Cod, 4 of them over 110cm as well as 18 large Golden Perch. This was one of those weekends where the big fish were on the chew, we had cracked the pattern and all we had to do was put in the hard yards and the fish followed. In any aspect of one’s life you can find yourself getting in habits that you don’t even realize, when I cast hardbodies I’m always thinking it has to be 120mm at the bare minimum, and a lot of times this works. On this particular trip whilst casting around this smaller hardbody I noticed how much easier it was to cast accurately, when your casting huge lures they easily get caught in the wind making it difficult to land the lures exactly where you want them. The 90mm size was a joy to use, much easier on the body when casting for a day and the increased finesse goes a long way when your running the lure exactly where you want it rather than a few inches off the mark. Another thing I noticed about the smaller lure was it had a slower buoyancy, it would still float over snags nicely but it didn’t have the super high buoyancy that larger Cod lures have. With the larger lures when you bump a snag you’ll pause the lure for a second or two allowing the lure to float back off the snag and before you know it the lure is back up near the surface in an instant, well out of the strike zone where you want it.

Both trolling and casting are equally as effective and both are essential in the pursuit of big Cod. Generally in the warmer months I prefer to troll the holes as the fish tend to be down deeper in the cooler water, then in Winter I prefer to cast more shallow sections of water.

When your looking to find a casting run

ideally I want to find a 200 meter stretch of big timber that’s sitting in the ideal depth range of 1-3 metres. The old tutelage of finding the biggest and oldest timber is a safe way of knowing you’re in the zone for a big fish, the biggest fish get the best spots in the river. The anticipation in fishing these areas is intense, knowing your lure is running past Cod god knows how big and hoping that you’ll get the opportunity to tangle with one. Over the course of a weekend I’ll have 2-3 different casting runs and I’ll work those thoroughly, if I’ve got action from a section once I’ve finished the run I’ll go back to the start and cast back through that run again. A good mate of mine showed me this technique, my initial thought to this was if you had just cast this section if there was an active fish you would catch it the first time around. Its funny how many times you’ll get action from a run on the second pass through, my guess is they had seen the lure on the previous pass and didn’t want to miss out on it the second time around.

The Murray river in its entirety is over 2500 kilometres in length, from below Hume there wouldn’t be too many kilometres within the river that don’t hold metre long Murray Cod. No doubt there are stretches that hold more than others, different parts of the Murray have different characteristics. For example around the Strathmerton and Tocumwal areas there are loads of Trout Cod and Silver Perch, where as down the lower end of the Murray past Mildura you would barely see either of these species, its more large numbers of Golden Perch and big Murray Cod.

Generally anglers targeting large Murray Cod will start anywhere from Echuca all the way down to South Australia, all of the locks hold giant Cod but where do you start? The first thing I do is look at the water levels, there are a couple of different live river data websites that you can keep an eye on and check what the river is doing. Ideally you want to be fishing a steady lock, the steadier it is the more consistent the fishing seems to be. A slight rise is good, a slight drop you can still catch however it is noticeably slower. A big rise or a big drop seems to really effect the fishing for the worse.

When you’re looking at online river data its important to check how regularly its updated, if its updated once a day or every second day you might think you’re going to a lock when its on the rise when actually the rise has already been and its now dropping. You can check this information on your phone when you are out the river, if you’re in a lock that’s copped a big rise you can expect the lock above to be on the drop. If you’re lucky the lock above that may have more steady flows. One trip comes to mind fishing lock 7 the fishing was very tough, over the course of 2 days we did have action from 2 large fish unfortunately neither stayed connected, however it was still slow going. We spent the next morning up at lock 8 and as you would expect this lock had dropped, around 3 inches, the water clarity was better but we didn’t get a touch in the 6 hours of fishing for the day and decided to make a last stand up at lock 9. None of us had fished lock 9 but we got up there with 2 hours of light to spare and decided to spend that time casting a likely looking stretch. Within an hour we’d landed a fish well over 120cm, one fish of that proportion makes a weekend we were all thankful for making the change. I don’t like to chop and change moving around locks like we did, usually I would rather persist with the plan, however the circumstances that we were presented with regarding the fast flowing high water levels did suggest that it was worth the risk in making a change.

The mighty Murray Cod can be a fish of thousand of casts, they are bloody challenging fish to catch consistently especially the bigger fish, every detail you get right tips the odds slightly in your favour. I personally prefer to cast for them, there is something that is so satisfying about a fish on the cast, when you’ve spent days on the river casting at timber nothing beats getting annihiolated by a big green fish. When you’re heading up the Murray for your next trip make sure casting is on the agenda, once you crack it casting there is no coming back… 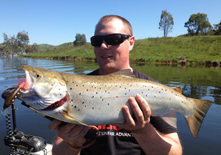 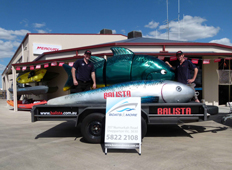 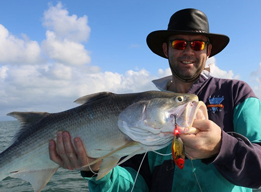 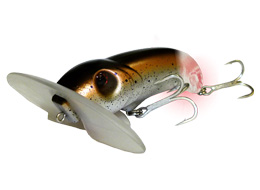 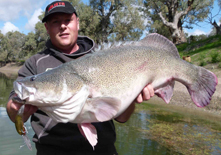