Targeting Murray cod in their home waters in the Murray river is without a doubt one of my favourites types of fishing. I think there are few fish that provide such a challenge with many angler devoting their whole lives to catching them. I’ll run you through some of the tips and tactics that I find successful while fishing the river.

Gear To Get It Done

Firstly you need to get yourself equiped with the right gear to get the job done. The fish in the Murray river are definitely a quality over quantity, so you want to make things as easy as possible for your self to get that bite, which in some cases can take days to get. Lure choice for me has always been a fairly simple affair. I like a large surface lure for dawn and dusk fishing. The Balista Tremor has proven itself time and again as a very reliable choice for this scenario. Ready to fish straight out of the box, it comes rigged with super sharp hooks which are more than strong enough to land that fish of a lifetime. As far as big lures go, it is easy to cast and wind for long periods, which is perfect for the Murray. My preference for the waters I fish (which is usually the Lower Murray) is the paddler/crawler bib. This makes the most noise and has been the undoing of a number of very large cod over the past couple of seasons. Once the light starts to get high, it is time to search the depths. While fishing the Murray, one of the biggest mistakes that anglers make is looking for that golden ticket and continually change lures throughout the day.

My opinion is the best variation you can make is the snags you are casting at. Anyone that has fished the Murray would know there are endless amounts of timber to cast at. With that in mind, I will tie on a Dyno 90 which is designed for this style of fishing and not change it until the light begins to fade at the end of the day when the tremor comes back in to play. Like with all Balista’s designed for cod fishing, the Dyno 90 is ready to fish straight out of the box. The only change that I do sometimes make is to colour the bib in black with paint or a permeant marker. This creates a bigger silhouette which has been the undoing of some big fish in the lower Murray. Rod and reel selection the past couple of seasons has been an 8ft swimbait rod matched to a sturdy low profile bait cast reel. Your outfit needs to be comfortable for you to cast for days on end and this is different for everyone. I like the longer rods simply because they require less effort the cast long distances and can handle the weight of the Tremor with ease. I always spool my reel with 50lb braid and run a rod length long 60lb leader which is connected via an FG knot.

Having a set game plan is a massive key to success while fishing the Murray river. Just remember you are hoping for one bite, from one fish throughout an entire days fishing. So if you have a plan you can make the most of each minute and increase the amount time your lure spends in the zone. I often explain to people that it takes one cast to catch the fish of a lifetime and the more stuffing around you do the less casts you will have. Sounds simple right?! My days cod fishing is always planned to work good runs of timber before moving on to the next one or turning around and re-fishing the one that I just did. For those that haven’t fished the Murray river before you will find that the river works in quite clear runs of timber. These usually start after a deep bend and can be on either sides of the river. I like to target areas that are three to five or six metres deep and any log big or small can have a cod sitting on it. While there are bits and pieces of good looking timber everywhere, I like to be able to get in to a rhythm and work methodically from one snag to the next under the power of the electric motor. Rather than having to use my petrol motor to burn to the next snag. So find yourself some good runs that have logs reasonably close to each other and begin casting at the very start and work every log until the end. This will have your lure swimming in front of fish far more often. Just think if you need that one cast to be on the money and you can increase those casts by up to 50 for the day it will make all the difference. I’ve had big fish bites the very first cast of the day right up until its almost dark so there is no real telling when it may happen. You just need to treat it like a job and not stuff around thinking its not going to happen, because if your lure is swimming in the right places, something always happens! 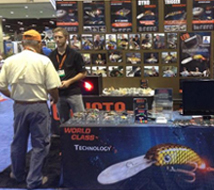 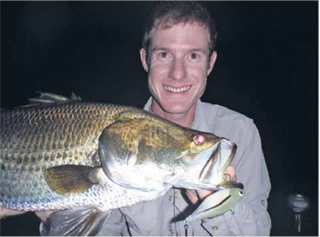 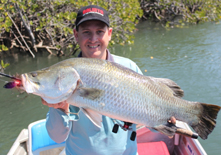